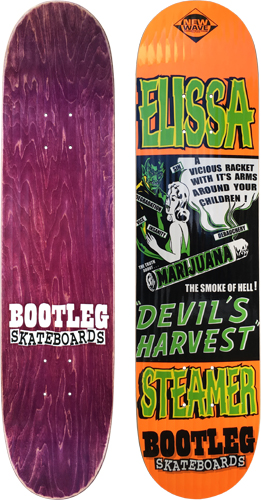 This board graphic features the cover of the Devil’s Harvest movie that was released in 1942. The deck uses the New Wave construction, a popular way to produce decks in the early 2000s. The bottom ply has little waves, it is meant to slide better on ledges and rails. That graphics also came out in a yellow version but without the New Wave construction. Bootleg Skateboards was created in 2001 by Jay Strickland who also co-created Baker with Andrew Reynolds that same year. Bootleg was the sister company of Baker, but didn’t stay long after its creation. Elissa Steamer is probably one of the best female skater of all time and the most influential one, thanks for being part of the Tony Hawk’s Pro Skater video game series. This board graphic is featured in the fourth game of this series but the words “Marijuana” and “Harvest” are covered with a “Censored !” sticker.

This deck is for sale in the shop, take a look now.