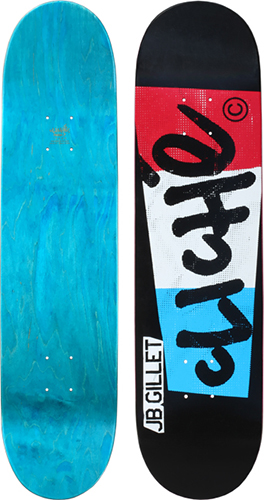 The deck is part of the five piece Flag series released in 2013. It was made by Cliché Skateboards, a French company that Jeremie Daclin started in 1997. On this board graphic we can see the brand logo over the french flag. JB (Jean-Baptiste) Gillet is a French skater from the city of Lyon. But this series didn’t consist of putting the country flag for every graphic. Lucas Puig, another French skater, had the Occitan flag for his graphic. Also, Pete Eldridge and Joey Brezinski, both American skaters, had respectively the American and Californian flags on their board. The artist Eric Frenay was the creative director at Cliché from 2001 to 2016, the year of the brand ended. He shared a great collection of the board graphics he did for Cliché on his website.

You can read our interview with JB Gillet here.