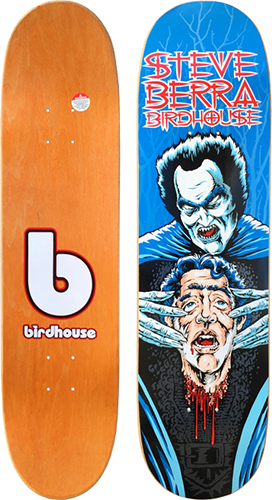 This board graphic shows a headless horseman hold by a vampire. A great attention of details can be seen on both heads. This deck is similar to the Andrew Reynolds Kosickutioner deck in the design, which was released in 2000 by Birdhouse and also made by Sean Cliver. In that similar board graphic, we can see a villain holding a bleeding head with his hand, which is Rick Kosick, who worked for Big Brother magazine and on the Jackass TV show. Steve Berra left for Alien Workshop in late 2001 and the board model here is one of the latest released with Birdhouse.

This deck is for sale in the shop, take a look now.